Where does one begin?

You would think four times is enough for anyone person to see a musical…. Well you’d be wrong. Those of you that have seen Disney’s Aladdin the hit broadway musical (currently in Melbourne) will know what I’m talking about.

From the very first moment the orchestra plays the first note & that curtain rises & you’re greeted by genie (Michael James Scott) setting the scene/story, you better strap in cause you’re in for a magic carpet ride of pure Disney magic.

Whether it be the stunning glistening array of sets, costumes & props (that have real Swarovski crystals might I add & are truly something to behold) are just the cherry on top of what I would call eye candy let alone the special effects aka Disney magic which take flight all throughout but especially the magic carpet ride/a whole new world scene  where you’re truly sitting there holding your breath, speechless going how did they do that?

And then there are the stars of the show!

Michael James Scott lets just say it’s quite easy to see why Australia has fallen in love with their Genie in the lamp. He’s truly a one man extravaganza who steals the show like seriously how much talent, witt, sass can one person have? Aladdin is worth going just to see what Micheal does with the showstopper ‘You’ve never had a friend like me’ The applause lasts for ages. But I’ll let you experience that for yourself. Then theres Ainsley Melham as Aladdin the loveable street rat with the heart of gold…. one might say he was born for the role the way he fully embodies/throws himself into the character making him so believable  & don’t even get me started on his “Proud of your Boy” number tears all around. Next in line smashing the role of the sassy, charming & fiery princess Jasmine is the gorgeous Hiba Elchikhe her soaring, pure vocals throughout the show are like a symphony for your ears but particularly during “A whole new world” is just astonishing. Last but certainly not least is  the ever so talented Adam Murphy as the evil, menacing Jafar one will never know how he so effortlessly keeps such a stern, straight & unimpressed face let alone perfecting the iconic Jafar evil laugh while adding so much humour to the role.

All in all the entire cast & company do such a hands down incredible job no wonder they play to sold out audiences & standing ovations every night.

Aladdin is playing at Her Majesty’s Theatre until January 28th 2018 great seats are still available so what are you waiting for? Come see the best thing to come to Melbourne before it vanishes. 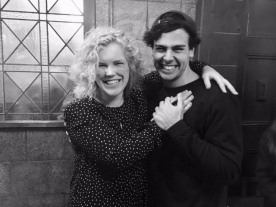 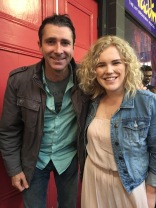